The participants, venues and dates have been set for the Copa América 2011. The tournament, which will be held in Argentina for the first time since 1987, will kick off on the 1st of July next year and finish on the 24th of the same month.

The difficulties inherent in organising a knockout competition for a ten-nation body such as CONMEBOL meant that the Copa América was always a rather awkward affair. Prior to 1993, when they began inviting teams from Central and North America, there were three groups with three teams each, from which the top team advanced, while the winners of the previous tournament came in to make up the fourth team in the second round/semi-finals. This meant that Uruguay could win the 1987 Copa with a 100% record after only playing two matches. Since 1993, however, invitations have generally been extended to CONCACAF members. In Venezuela 2007, ever-presents Mexico were joined by the USA, who sent a team of youths and duly went out in the first round. This time their place will be taken by Japan, who will be competing for only the second time. They last featured in Paraguay ’99, where they finished last in their group after defeats to the hosts and Perú.

boludoísmo of Argentina and South America’s finest barras, another of the intriguing aspects of next year’s Copa América is the list of venues, which were defined on Wednesday afternoon. For many reasons, from the constitution, which grants Buenos Aires autonomy, to historical and economic reasons which saw the country’s infrastructure developed with all roads leading to the Federal Capital to get the meat on the boat, Baires has for far too long been the focal point of all activity in Argentina. It sometimes appears that Argentina is Buenos Aires and little else. This is certainly true in football terms, for 13 of the 20 teams in Primera are from Buenos Aires; and so close is La Plata to the capital that Estudiantes are playing there, in Quilmes, whilst their ground is renovated for the Copa América.

However, in a rare act of true federalism, the organisers have decided to spread the venues right around this vast country. While there won’t be any games on any of

Sylvester Stallone’s glaciers down in Patagonia, they will have to travel to far-flung places such as Salta, Mendoza, San Juan and Jujuy. This will clearly benefit the poor provinces in the north of Argentina and will bring even more tourists to beautiful spots such as Mendoza. Nonetheless, despite the tournament taking place during the winter holidays, Mar del Plata, which also boasts the Mundialista built for the ’78 World Cup and is usually buzzing at that time of year, has been omitted. This is most likely due to  Nalbandian’s bitchy comments about the Mar del Plata mafia and the ensuing farce that was Argentina’s Davis Cup final defeat in 2008. Likewise, it seems Rosario, despite being Argentina’s ‘second city’, has been punished for its part in the [latest] humiliating defeat to Brazil in September last year. More importantly, however, several of the stadiums in these marginal provinces are rather small, with those in Salta and Jujuy capable of holding no more than twenty odd thousand people. In Avellaneda alone, on the other hand, both Racing’s Cilindro and Independiente’s brand new Libertadores de América hold 50,000 and 32,500 respectively. (Unfortunately, the refurbished Bombonera will not be completed on time). Although such an unselfish and unusually far-sighted decision is to be praised – this is the unholy AFA/government alliance after all -, Pegamequemegusta is miffed at the omission if its home town and wonders aloud on the bus if there will be less of a festival atmosphere in Buenos Aires during the competition as a result.

Of course, as regards the football, the Copa América may not be the greatest competition in the world. Still, as the topsy-turvy qualifying campaign for South Africa showed, South American football is full of surprises. Brazil barely scraped through to the final last time, beating a super sassy Uruguay on penalties after having been totally outplayed.  Then, despite Argentina playing their sexiest football for years, with Riquelme, Messi, Tevez, Masche, Cambiasso, Zanetti, and still-good Crespo and Ayala (ay!) all on top form, they got trounced 3-0 in the final (a result they have never recovered from, in my opinion) by the über-physical Brazil team we’ve  grudgingly learned to ‘respect’. Not even the potential for a third successive showdown between these two can be dismissed as tiresome: after all, Argentina will be at home and, incredible as it may sound, have not won the Copa América since 1993!

Pegamequemegusta watched most of the last instalment in a brothel, hence, while it is loath to criticise the opinions of ex-workmates, would like to see some more knowledgeable folk around in 2011. So come visit next year for what will be a celebration of all things criollo, a glorious concoction of road trips, football, big juicy steaks and other Sylvester Stallone-related activities. 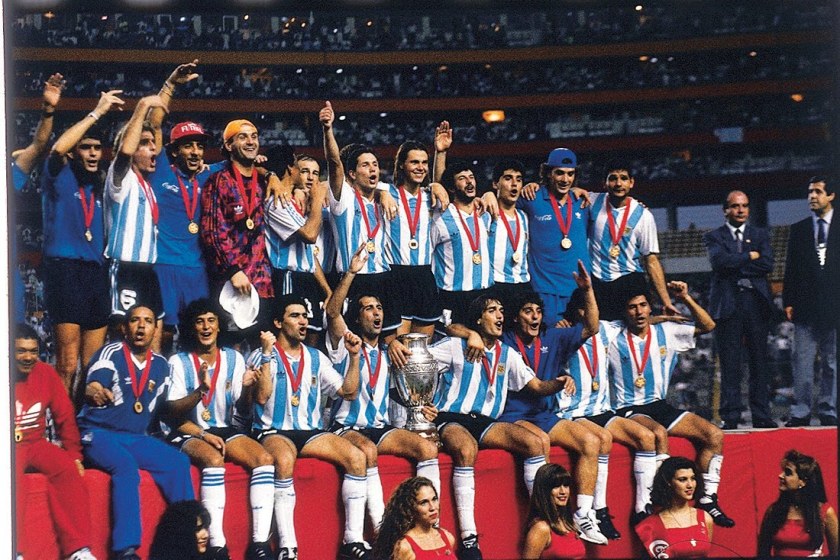