There is hope, however. Occasionally the perverts break out. Last night in Santa Fe was a prime example of otherness, of freaky queerness, as Sergio Batista’s boys gave us a lesson in how to buck the system. Cunningly, they made a mockery of the whirlwind of promotions using the Copa América as an excuse to vend their dubious wares. Every stumble, every misplaced pass, every balooned free kick, every weakling challenge with less shoulder than a quadreplegic, every outlandishly bizarre through-ball to an advancing Colombian striker, every aimless scuttle up the wing was a hook in the eye of the hustlers and their shoddy merchandise. Buy a new TV for the Copa América! Make it a plasma! Get 15% off your building supplies with this Copa América coupon! Play like Messi, drink Coca Cola! Well, last night Messi showed em all Coca Cola doesn’t just rot your teeth.

The newspapers and radio waves of the Argentine Republic were a-fizzle again this morning with questions that go right to the core of one’s being, questions of such profundity angels need a crash course in spelunking just to probe their quartz-starred depths for a whiff of sin. More than mere questions, indeed, they were treating issues. For one doesn’t like to mess around when it comes to the overarching matter of identity, of who you are and what you are doing with your life; not to mention the ethical quandaries involved regarding one’s relationship to society, how your work affects others, how, my god, how it could affect children, or how you should feel about accepting money in exchange for the giving of pleasure. Yes, the newspapers and airwaves were positively buzzing with debate over the removal of what is known as Rubro 59 from a well-known Buy & Sell-type publication.

Rubro 59, of course, is where the advertisements appear for those seeking a little solace with a stranger. Scandalously, the project of human happiness begun several thousand years ago has failed to develop a system whereby every member of a society can discharge themselves of the tyrannous instincts their body and mind impose on them. Nor has it ensured a common level of wealth for all, hence some people quite rightly seek to fill this hole in the market by offering themselves as receptacles for the genital-orientated violence of others in return for money. If these despotic urges are not satisfied, and regularly by gum, emotional states commonly known as unhappiness, frustration and even anger come to prevail. Hence, for the good of all, the people willing to provide these services quite naturally seek to let others know about them. They do so, just like any other business, through the media. On Tuesday, however, the President decreed that henceforth this practice would be prohibited, Rubro 59 would be no more, presumably because sated citizens do precious good to a nation’s economy.

Dear handsome readers, so sure in your skins, of course you have never suffered exclusion or crises of the self. Yet although the demagogues of the free press will no doubt try to convince you the move is solely concerned with the protection of the vulnerable, be not so fooled. This is about identity. It’s about streamlining the urges of the masses, bringing them into line with the demands of the market. It’s their way of telling you who to be. Sure they’ll put a few sell-out queers on primetime tv now and again, but they’re always hardworking, honest consumers, slaves to the capitalist machine. The real deviants (from the norm) they condemn to clandestine dives.

There is hope, however. Occasionally the perverts break out. Last night in Santa Fe was a prime example of otherness, of freaky queerness, as Sergio Batista’s boys gave us a lesson in how to buck the system. Cunningly, they made a mockery of the whirlwind of promotions using the Copa América as an excuse to vend their dubious wares. Every stumble, every misplaced pass, every ballooned free kick, every suicidal through-ball to an advancing Colombian striker, every aimless scuttle up the wing was a hook in the eye of the hustlers and their shoddy merchandise. Buy a new TV for the Copa América! Make it a plasma! Get 15% off your building supplies with this Copa América coupon! Play like Messi, drink Coca Cola! Well, last night Messi showed em all Coca Cola doesn’t just rot your teeth. What other possible explanation is there for this, for example?

The only thing that went wrong in la Selección‘s plan to raspberry capitalism and heterofascism in the face was that the match ended 0-0. Despite the pleasing symbolism of those two gay-friendly digits – anti-digits really, to boot – a Colombian victory would really have led to a revolution. God knows Gaby Milito and Zanetti did everything to help them, but the cafeteros managed to miss two open goals. Moreover, Argentina goalkeeper Sergio Romero clearly hadn’t been filled in on the plan, making several excellent saves to follow up on his nifty performance against Bolivia Friday last.

Hence the media was left without a real fracas to savour, just a bewildering, ominous evening. They felt they had been challenged but weren’t quite sure why. Qualification was still pretty likely, after all. With the appearance of the Rubro 59 story, they were saved. It became clear that to discuss questions of identity and Argentina’s Copa América campaign was more or less the same thing. 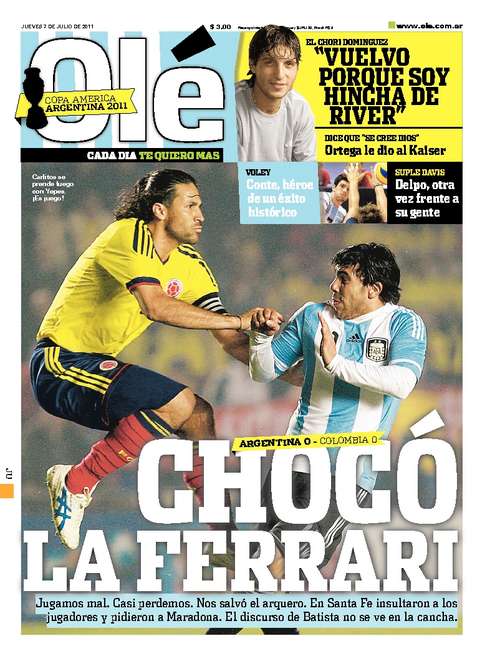 So Olé was once again consumed by angst concerning the team’s innermost being. The photo on the front cover portrays the people’s warrior as a nancy, pulling out of a challenge with the fiery, maned, Colombian alpha male Yepes. Inside, two of their top scribes address the question of identity. Marcelo Sottile says: “Checho has spoke so often of playing like Barcelona that la Selección no longer even plays like Argentina.” While Juan Pablo Varsky’s editorial piece on the onside cover carries the headline: ‘An Unrecognisable Messi’ [‘Ni Messi se parece a Messi‘].

Here it is in full:

La Selección rescued a point last night. A vital point. When you play that badly, when you’re so completely outplayed, when the only saving grace is your goalkeeper, when you end up hoofing the ball out of defence hanging on for dear life, a draw feels like a blessing. Especially in a competition that doesn’t leave you much room for manoeuvre. La Selección is not dead yet. They can still advance to the next round.

But is the Selección still alive? Rather, is the team still alive? The team, the, team, what bloody team? Let’s see. When you have the best player in the world at your disposal, the obvious question is how the team measure up to him. And if you’ve been watching this version of the Selección, you’d have to say: in no conceivable way. La Selección in no way reflects Messi. Hell, Messi himself is unrecognisable. If you didn’t know who the little fella in the number 10 jersey was, you’d probably say to yourself: he’s an interesting player that there lefty, he’s got some nice moves…

Batista. Let’s talk about Batista. It might seem insulting, a lack of respect, but it’s about time. Possession alone does not make a team. It’s about how you use the ball, how the team occupies the space on the field, how you deal with your opponents. And the way the Selección occupies space on the pitch is horrifying. When they have the ball, there is a dearth of options, of angles, of intensity. And when they lose it, there’s no-one standing by, they don’t regroup, there’s no cover. Colombia, on the contrary, had all of that. Wise to Argentina’s strengths and weaknesses, Colombia controlled, bossed and schooled the Selección in how to work as a unit. Far from personifying their individual genius, the Selección was the embodiment of Lavezzi’s obstinacy, Tevez’s contumacy, Zanetti’s obduracy. A Selección, in the end, where everyone either takes two touches too many or one too few.

You will note, dear handsome reader, that the article in no way singles out Messi for blame or attacks him personally. These days Messi-bashing only features in the discourse of the terminally wretched – shock jocks, daytime chat show hosts and dyslexic teenagers on twitter. Criticism from the crowd in Santa Fe was in no way limited to Messi himself, raining down from all sides on all the players in the form of a sarcastic song usually reserved for (club) teams in the most ignominious of circumstances: Jugadooores / La concha de su maaaadre / A ver si ponen hueeevos / Que no juegan con naaaadie [Basically: give it some socks, sure the other team are shite]

Hence our surprise at Jonathan Wilson’s piece in the Guardian today. No, all football people recognise that Argentina’s football ills go far beyond Messi. He still occupies the centre of it, but only because everyone is so convinced any possible solution must come through him.

In any case, any criticism that might be out there only comes from the capitalist establishment. We here at pegamequemegusta, and now you, dear perverted reader, know that the Messi who plays for Barcelona could not possibly resemble the one who turns out for Argentina as they are two completely different projects. Barcelona seek to advance the cause of the Catalan nation, and the Qatari one, too. Why, until recently they explicitly sponsored the protection of children via UNICEF. Whereas Argentina look to give a voice to all those who rejoice in the wasting of seed.

We argued on Tuesday that the Selección would overcome Colombia once they rediscovered the death drive, personified by el Kun Aguero, who is currently seeking a move to Real Madrid. However, last night’s events in Santa Fe showed us the error of our ways. Last night in Santa Fe we saw an expression of queerness, a refusal to reproduce, a refusal to get into bed with capitalism and heterofascism. We saw quite a daring refusal to even play the game of football. It was remarkable. Unfortunately, the revolution was left incomplete as Colombia never went beyond giving a masterclass in tantric titillation. However, you can be damn sure the same mistakes will not be repeated against Costa Rica. Next Monday night Argentina will finish the job: no more football, no future. Aguante Argentina carajo!